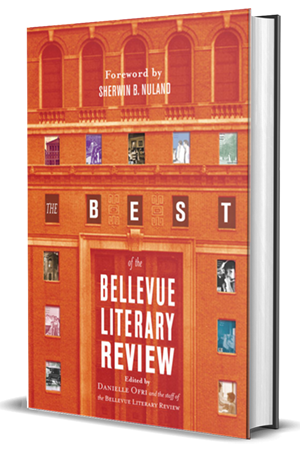 by Julie Nichols
New Pages
The Bellevue Literary Review describes itself as “A journal of humanity and human experience.” Reading the Spring 2008 volume, I continually concluded that BLR could not be described more appropriately. The description may sound broad (after all, isn’t all writing about human experience?), but each contributor holds a lens over the human psyche, incisively examining it; this is the thread that unites the issue’s works of poetry, short fiction, and nonfiction, many of which focus on parent / child relationships, and all of which delve into connections between body and mind.

“Letters to Michiko,” by Leslie Jamison, won the Bellevue Literary Review Goldenberg Prize for Fiction. Jamison’s imagery is vivid and direct, like the narrator observing that, “The room still smelled like shit, but we were watching game shows on the television and eating tapioca pudding and trying hard to pretend.”

The narrator is eloquent about interacting with his dying, previously estranged, father. The first person voice grasps themes of resentment and fear, directly summarizing his emotions. Michele Morris also examines the imminent death of a parent in “Lady of the Lake.” Like Jamison’s narrator, this story’s female narrator is afraid, but resentment is replaced with guilt, as she tries to balance the role of daughter with her role as the mother of young children.

“Cat, Dog, Horse,” by Linda Gorelova, and “A Great Civil War,” by Jessica Apple, utilize childish voices to explore parental frailty. Gorelova’s narrator recollects her father’s terminal illness and the relationship between her father and mother, the intricacies of which were not understood by the narrator as a child. Apple’s narrator is a sixth-grade girl, whose mother is comatose. The narrator’s voice is engaging, energetic, and naïve, as she devotes equal gravity to her schoolgirl crush as to her mother’s illness.

Connection between body and mind is prevalent in the issue, especially when either body or mind is frail. The action of Maija Stromberg’s story, “A Vehicular Situation,” is enthralling, as the obstinate main character with a sharp mind but a bad back struggles to show compassion to a senile man.

In “The Road from Cubabi,” by E. Dianne Bechtel, the Honorable Mention for the Goldenberg Prize for Fiction, poverty and its effects on the body snap into view as Gabriela walks home along a dirt road. She is a Mexican woman with an arthritic hip and an unwanted pregnancy. Unwanted, because her body cannot physically support the weight of a fetus.

Merilee D. Karr’s nonfiction piece, “Plant Life,” won the Bellevue Literary ReviewPrize for Nonfiction. Its pace is smooth, and its tone enjoyable, as Karr highlights the differences between a tree disease and a human disease, between plant death and human death. “Trees don’t have a moment of death like we do,” she writes. “The tree is not dead until that slow upward force stops. I have known people who lost that force–people tired of fighting gravity.”

“Help,” by Andrea Meade, the Honorable Mention for Nonfiction, draws the reader into the dynamics of a family dealing with Alzheimer’s Disease. The piece reads like fiction, very good fiction in which all the characters’ motivations and interactions are completely believable. Cheryl Pearl Sucher’s nonfiction piece, “The Next Miracle,” describes being raised by an ill mother. The piece is eloquent and, at certain moments, heartbreaking.

Brittany Perham, Amanda Auchter, and Steve Gehrke are the winners of the Magliocco Prize for Poetry. Perham and Auchter’s poems explore loss and absence, and each is beautifully written. In “Lines Written in the Unit, March,” Perham writes, “Always there will be a dream, always / a waking. Someone will come to stand in the doorway, / or darkness will come to stand in the doorway.”

Auchter, eluding to the death of a loved one in “Nothing but the Shape,” writes, “My hello nothing but the shape / my mouth takes, the air you feel / when you press your fingers to my lips.”

Gehrke’s poem, “Hemispheres,” is interestingly formatted and has a momentum that creates suspense. The poem is descriptive and dark as the persona grapples with questions that are not easily answered. Gehrke writes, “…some untethered part / of me took his flailing palm, / one arm choking, while the other / held the panting body’s hand / which is how I imagined then / God must ride me through / the world, soothing yet murderous…” 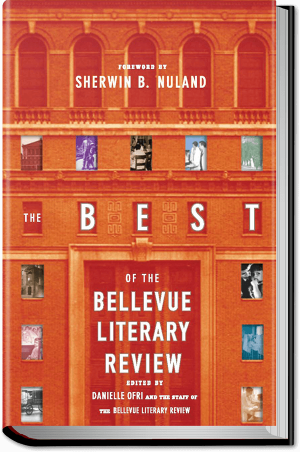 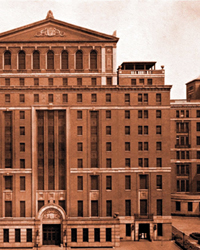 An Outbreak of Poetry (and Prose) at Bellevue