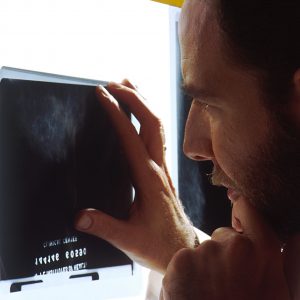 We were at the end of our visit. We’d done the full history and physical exam. We’d reviewed the status of Ms. R’s diabetes, checked her blood pressure, adjusted her three diabetes medicines, reviewed her cholesterol levels, written out all the prescriptions, arranged appointments for the eye doctor and the nutritionist. Every few minutes I turned from her to the computer to type notes of our conversation so that I’d have appropriate documentation of our visit together. I’d checked to see how her kids were doing and how things were at work. Now we had two minutes left of our allotted fifteen minutes to review “health maintenance.” I quickly reviewed the status of her vaccinations, the date of her last Pap smear, discussed the importance of regular exercise, use of sunscreen, five servings of fruits and vegetables per day. Now there was one minute left.

Recently, a memo had been sent to all of the physicians in our department, reminding us that mammograms were one of the “Performance Indicators” that regulatory agencies use to monitor our hospital’s quality of care. “We realize that the controversial data regarding mammograms for women aged 40-50 are not resolved,” the memo said. “However, we urge you to order this important screening test for all your patients over the age of 40.”

In the academic medical setting, “evidence-based medicine” is practically a mantra. In my medical center, we doctors consider ourselves academic. Large portions of our time are devoted to teaching medical students and residents. Self-education is also a priority, and weekly educational conferences and journal clubs are a must.

We pride ourselves in thinking very carefully before ordering certain tests or giving particular medications, debating whether the medical literature truly supports it. We eschew drug company gifts and free samples, trying to be objective and to base our decisions on the hard data and the needs of our individual patients.

Over the last few years, there has been much discussion about mammograms. The benefits for women over the age of fifty have been fairly well accepted by the medical community, though there certainly have been some hotly-debated challenges to that assumption.

The data for women aged 40-50, however, remain controversial. Studies have offered conflicting evidence as to whether this screening test is beneficial, neutral, or even perhaps harmful. I looked at Ms. R and wondered if, in the remaining minute of our time, I could do justice to this complicated issue. Could I adequately explain that although the lifetime cumulative risk of breast cancer is the much bandied-about 1-in-8 number, the statistic for women in their forties is closer to 1-in-67?  For women in their fifties, one life will be saved for every 2500 mammograms. But for women in their forties, it can take 5000-10,000 mammograms to save one life. And for those women in their forties, there will be many “false positives:” unnecessary biopsies with their attendant cost, risks, and anxiety. Younger women, with denser breasts and lower overall risk of breast cancer, are much more prone to false positives. One review estimated that after ten mammograms, nearly half of all women would experience a false positive requiring additional procedures. If all women over forty had annual mammograms, there could be tens of millions of false positives.

Ms. R was waiting for an answer. If I wanted to offer her true informed consent, I’d need much more time to explain these subtle, but critical, details. The doctors on our faculty spend hours analyzing the evidence, dissected the minutiae of each clinical trial, and even we can’t come to an agreement. How was I supposed to summarize this in one minute for my patient?

Then I thought back to the memo, how we are being judged by the numbers of mammograms we order. When that memo first arrived, it outraged us all. How could this administrator say, to a group of educated academic physicians, “the evidence for this test isn’t clear, but please do it anyway”? What chutzpah!

But it some ways, it would be easiest just to order the mammogram; I wouldn’t have to worry about a protracted discussion and I’d satisfy the administrators.

Evidence-based medicine is a complicated issue. Meant to ensure more rigorous and consistent science in decision-making, it often induces more confusion than clarity. It also means different things to different people. In some ways, evidence-based medicine is more about treating populations of people rather than individual people. If it takes 5000 mammograms to save one life, then the value of mammograms depends on who you ask. For that one person whose life was saved, the mammogram was nothing short of the Messiah. For the other 4999, it didn’t change much in their lives: maybe it was an annoyance, maybe it was painful, maybe it was an unnecessary cost. And then there will be a few people who were actually harmed: infections and bleeding at the biopsy site, missed work for the unnecessary ultrasounds and biopsies, anxiety and depression from the unfounded fears, which may in turn affect family, work, and health.

For administrators, evidence-based medicine carries entirely different meaning than it does for doctors or patients. Administrators deal with patients as data—numbers of visits per year, percentage who get a PAP smear, numbers of admissions for chest pain or pneumonia. Numbers are clean, and can be arranged and rearranged in many permutations. They can be erased and recalculated at will.

Patients, and patient care, on the other hand, are inherently messy. Despite the advances in medical research, much of the doctor-patient encounter is profoundly non-quantitative with nary a shred of scientific evidence. There are fears, concerns, language barriers, cultural barriers, misunderstandings, hidden agendas. Sometimes what a patient most needs to address isn’t even listed on the choice of “Diagnosis Codes.” For the practicing physician, patient care can be frustrating, time-consuming, gratifying, even elating at times. But it is always real.

And so I looked back over to Ms. R. I smiled and sighed. I told her that the evidence was not entirely clear as to whether mammograms were beneficial for women in their forties. But it is clear, I reminded her, that controlling diabetes is absolutely beneficial.

Ms. R. decided that she wanted a mammogram. I told her that this was a fine idea, as long as she realized that the mammogram was an imperfect test, that “positive” results didn’t necessarily mean cancer, and that “negative” results didn’t necessarily give her a clean bill of health. We were already running past our “minute,” and I knew that other patients were waiting. But the concept of a test being imperfect is not an easy one to explain.

I hoped I’d given Ms. R. a reasonably fair assessment of the evidence. I was also aware that somewhere in morass of administration, someone would be checking off a box on my “performance indicator” that I’d ordered a mammogram. But had Ms. R., after weighing the risks and benefits, decided against having a mammogram, my performance indicator would have been penalized, suggesting that I was not offering the highest level of care. Our discussion about the mammogram would not count. This points to the difficulties both of incorporating evidence-based medicine into practice and of measuring appropriateness of medical care. Each is geared to the larger population and neither performs particularly well with the individual patient and doctor.

Ms. R rose to leave and I bade her goodbye. Now I had to type in all the details of our discussion to ensure that my documentation would be appropriate. That would only put me just a little further behind schedule.  (from The Los Angeles Times)

They Sent Me Here